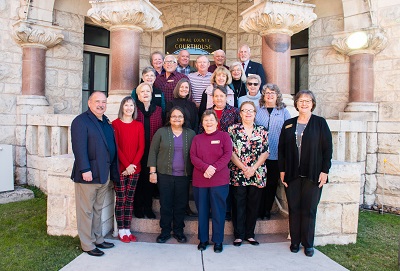 NEW- As of October 12, 2021, the New Braunfels Main Plaza is now listed in the National Register of Historic Places! The National Register of Historic Places is the official list of the nation’s historic places worthy of preservation. The program is sponsored by the National Park Service division of the United States Department of the Interior. Funding for the preparation of the nomination to the register was provided by a Texas Historical Commission Certified Local Government matching grant between the Texas Historical Commission and Comal County Commissioners Court with the Comal County Historical Commission as the Certified Local Government and sponsor.

The historic New Braunfels Main Plaza has been the focal point of activity of the New Braunfels community since the city was founded in 1845. Settlers celebrated the first Fourth of July at the Main Plaza in 1846 and in the years that followed, many more celebrations took place. This started a tradition that is still very much alive today. To celebrate New Braunfels’ 50th anniversary in 1896, their citizens raised money to beautify its main plaza. A cast-iron fountain was purchased and built in the center of the plaza. The following year, curbs were constructed around the plaza. In 1905, the Main Plaza bandstand was constructed after residents petitioned the City of New Braunfels for its construction. The neo-classical designed structure initially served as a stage for the summer evening concerts by the Waldschmidt Fire Department Band. This cultural tradition of music events continues today with many performances taking place at the bandstand. Also present on the plaza, are two war monuments commemorating the soldiers of the Civil War and World War I.