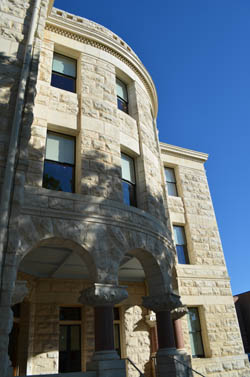 The district clerk has a duty to keep the records of the district court safe and properly arranged. The district clerk must, among other things record the acts and proceedings of the district court, enter all judgments of the court under the direction of the judge, record all executions issued and the returns issued on the executions, administer child support payments, administer trust accounts for minors ordered by the courts keep an index of the parties to all suits filed in the court, and make reference to any judgment made in the case and keep an account of all funds collected by the office, including fines and fees, and determine the amount due to citizens who serve on a jury in district court.

The District Clerk serves as the recorder, registrar and custodian of court pleadings, instruments or other papers that are part of any District Court civil or criminal case. In addition to those duties, the District Clerk:

Note: Please see on-line forms for Defense subpoena request. As of 4/1/2019 our forms have changed.

Notice of Change in Texas Law

On June 24, 2013, in Msc. Docket No 13- 9092 the Supreme Court of Texas issued an Order stating that all counties in Texas would transition into mandatory e-filing by attorneys for all civil, probate and family law cases.

Since Comal County already accepts e-filing we are on the fast track for the new implementation from Tex. File. This means we have an E-Filing Go-Live target date of October 2nd, 2013. We strongly encourage all attorneys to begin using Tex. File e-filing for Texas on that date.

By January 1st, 2015,  District Clerk, Civil and Family Departments will no longer be allowed by law to accept any paper filings from attorneys; they must be e-filed.

PUBLIC NOTICE:      Bring entire summons with you to court .  You no longer need to mail the summons questionnaire or submit it online.  This is ONLY for district court summons only.

The jury that most citizens are familiar with is called a Petit Jury. Every litigant has the right to trial by jury. In civil cases, no jury is impaneled unless requested. The requesting party pays the jury fee. When an indictment is tried in a District Court, it is heard by a Petit Jury of 12 citizens. Their verdict must be unanimous.

In misdemeanor cases, a person is not charged by Grand Jury indictment but on information prepared by the Criminal District Attorney's office. Such cases are filed in County Courts at Law and may be heard by a six-person Petit Jury. The verdict must be unanimous.

When called for Petit Jury duty for the District Court, jurors should report to the third floor of the courthouse annex.

Charged by the District Court are the same as those charged by the County Court. The Commissioners Court set the following fees according to Section 118.131 of the Local Government Code. These fees became effective January 1, 2004.

Free public parking is available at the corner of Seguin and Bridge Streets. The parking garage is for handicapped drivers and employees only.