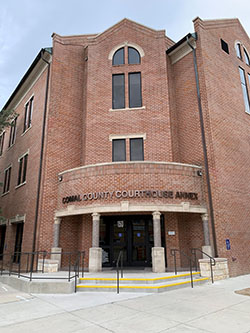 District courts have original jurisdiction in all felony criminal cases, divorce cases, cases involving title to land, election contest cases, civil matters in which the amount in controversy (the amount of money or damages involved) is $200 or more, and any matters in which jurisdiction is not placed in another trial court. While most district courts try both criminal and civil cases, in the more densely populated counties the courts may specialize in civil, criminal, juvenile, or family law matters.

District Courts are the general trial courts of the state, handling most major litigation. These courts hear felony cases, divorce proceedings, questions involving titles to land, contested elections, juvenile matters and any civil matter involving a claim of more than $1,000.

District judges must be licensed attorneys with at least 5 years of practicing law. They are state officials, elected to a four-year term, whose salaries are paid by the state. Supplements to Judges' salaries, District Court employees' salaries and operating costs of the courts are paid by the county.

The jury that most citizens are familiar with is called a Petit Jury. Every litigant has the right to trial by jury. In civil cases, however, no jury is impaneled unless requested. The requesting party pays the jury fee.

When an indictment is tried in a District Court, it is heard by a petit jury of 12 citizens. Their verdict must be unanimous.

In misdemeanor cases, a person is not charged by a Grand Jury indictment but on information prepared by the District Attorney's office. Such cases are filed in County Courts at Law and may be heard by a six person Petit Jury. The verdict must be unanimous.

When called for Petit Jury duty for the district court, jurors should report to the third floor of the Courthouse Annex.

Fees charged by the District Court are the same as those charged by the County Court. The Commissioners Court set the following fees according to Section 118.131 of the Local Government Code. These fees became effective January 1, 2004.

Special Notes: In the case where the sum is exorbitant, the Commissioners Court may adjust the fee. When money is collected by the Sheriff or Constable without a sale, one-half of the above rates shall be allowed.

For all services not listed above, the District Court shall charge $55.

In addition to his/her judicial responsibilities, the district judge also appoints and supervises the
District Court Administrator, County Auditor, Purchasing Agent, juvenile probation officers, adult probation officers and the bailiff of the court. Each District Court also has a court reporter who is appointed by the District Judge to record all court proceedings and prepare transcripts of those proceedings.

The district court administrator, appointed by the Board of District Judges, performs or oversees all non-judicial business of the District Court. He/She maintains judicial control of all court staff services, including functions performed by the clerk of courts, court coordinators, bailiffs, court reporters, probation departments and all other comparable services in county judicial district. The District Court Administrator also ensures that all civil, criminal, domestic relations and juvenile cases are set before the courts.